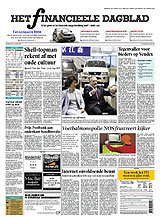 The leading Dutch financial newspaper was transformed from a single paper version to a multimedia publisher of financial information. Any piece of content is made available for electronic (re-)distribution -including the internet-, without additional handling: just choose the means of publishing and it is done, once or permanently, all or a selection.

Besides the paper based core, also real-time newswires were implemented , both incoming and outgoing. The last was a challenge: there is no system standard in the world,  a system was build based on Microsoft exchange which worked very satisfying.

We also took care of implementation of a new editorial system. Also here automation of repeating processes was key: the pages with the daily stock quotes were at the delivery of the implementation fully automated. And brought down from a 4 hour process to a 30 minutes.

The commercial systems ran on VAX-VMS systems, with quite outdated character interfaces. The technology was not supported anymore. A selection process was initiated to replace these systems. Two suppliers ended in a knock down challenge, which was won by SAP.

Your are off-shoring to China, or have the intention to do so? We offer an one day in house "cultural" awareness seminar. It is different from all other courses becasue it is base on real program management experience. Contact eric@s-o-b.biz for information.